Another milestone, and why it means so much. 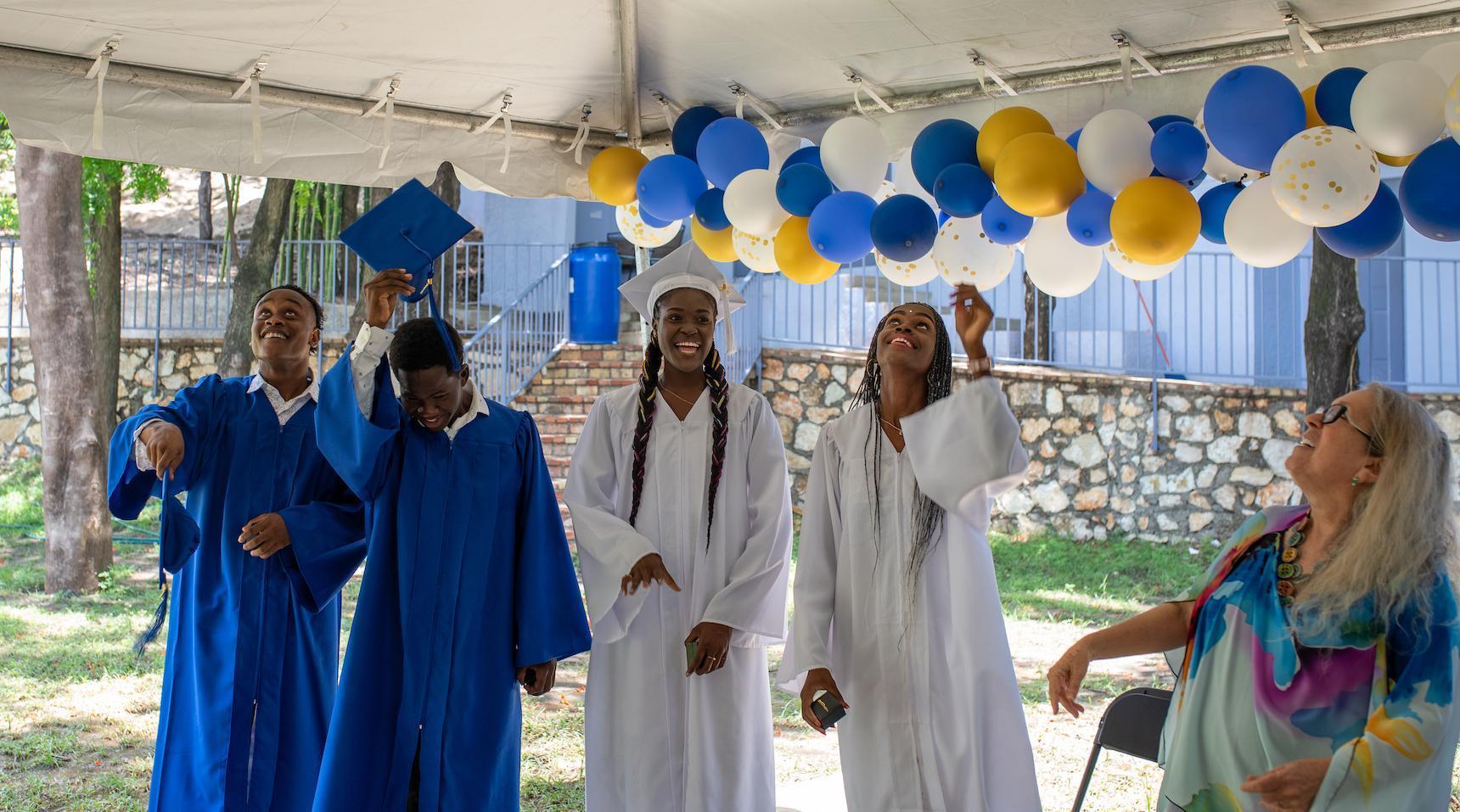 The chairs were brought out early in the morning. You know it’s a big day at the orphanage when chairs are set in place. It’s either a Christmas play, a concert by our teenage bands, or a graduation.

And since it’s June, it must be…

Graduation. For years, it was nothing more than a short symbolic ceremony, seventh graders turning to eighth graders, eight graders turning to ninth. Our oldest kids were just approaching adolescence and our younger kids were still wetting the bed. Everyone was starting school again in September.

But last year, for the first time, we sent one of our high school graduates to college in the U.S. And this year, four seniors were preparing to go.

Four? Yes, four. Samanza, Esterline, Kiki and J.J. Two girls. Two boys. Each with a full scholarship to Hope College in Holland, Michigan. All four are ready for the challenge.

How could this be? Weren’t they just small creatures with high voices, racing across the yard in odorless sweat? Didn’t they used to jump in our arms when we arrived? Now, every one of them is taller than me, the boys’ voices are deep, the girls have extensions in their hair and college majors on their minds.

My father, who had a great singing voice, used to croon a song at every family wedding or anniversary. The relatives would make him sing it and they would tear up when he did.

The song was “Sunrise, Sunset” from “Fiddler on the Roof.”

Is this the little girl I carried

Is this the little boy at play

Now here they were, the little girls we carried, the little boys at play, wearing blue or white caps and gowns over their summer clothes. They stood in a line in 93-degree heat behind a seated crowd of fellow kids, teachers, volunteers, nannies, staff, guests, and a few family members.

I tapped the screen of my iPhone, and “Pomp and Circumstance March No. 1” played over a large bluetooth speaker. We’d dragged outside and connected an extension cord.

Hey. You do what you can.

But once the ceremony began, there was nothing jerry-rigged about it. The kids did us proud. They did everyone proud.

Here was J.J., who once wore plastic bottles on his feet and wandered the streets looking for money, now giving a commencement address that began, “This graduation would not be possible without so many special people…”

Here was Samanza, who was once the little girl of our orphanage and who now carries the babies as if she were born doing it, beginning with “In looking at all these beautiful smiling faces, one thing comes to mind…I’ve made it!”

Here was Esterline, once paralyzed with fear during the earthquake of 2010, now a statuesque, confident 17-year-old, thanking the teachers “whose lives were sometimes at risk to come and teach us.”

Here was Kiki, who spoke no English and had no underwear when he arrived at age nine, now delivering an emotional, 15-minute graduation address that brought a huge laugh when, after already speaking for eight minutes, he said, “To begin…”

At the end, the other teenagers came up and formed a line. And with Nahoum playing the guitar, they locked arms and swayed as they sang the song “Graduation” by Vitamin C:

As we go on, we remember

All the times we had together

And as our lives change, come whatever

We will still be friends forever…

It wasn’t just the speeches by the kids, or the presentation of their diplomas, or the way we had to tell them to flip their tassels to signal they were officially graduated.

It was how the other kids watched them, with awe, with admiration, with joy. They couldn’t wait to pose for photos with them or try on their caps and gowns. Esterline, in her speech, said the orphanage had offered her “inspirations hiding in plain sight.” That’s what the new graduates were to the younger kids. Inspirations, literally right in front of them.

The heightened laughter, the joyous feasting on a huge meal by our cook “Chef” Harry, the endless hugs of appreciation from the kids to their teachers, their nannies, to us – well, it made for one of the top five days I’ve experienced since being here.

Why does graduation mean so much? Because in some ways, as Samanza observed, it means we made it. We made it through the dangers, the hunger, the storms, the violence, the natural disasters, the daily threats that stack up like a dam, threatening to halt the flow of their childhoods.

We made it through all that and brought them to graduation, after which they prepare for their first airplane rides and a destination that will change their perspective forever. It’s a sense of pride, of joy, and, honestly, of relief. Nothing is certain in Haiti. Certainly not reaching adulthood. And definitely not heading off to college.

As we posed for pictures and the four graduates said their various forms of “thank you”, I could hear my father’s lovely voice in the back of my head, another milestone occasion, another passage of life.

When did she get to be a beauty?

When did he grow to be so tall?

Wasn’t it yesterday when they were small?…