Letting them in on the surprise! 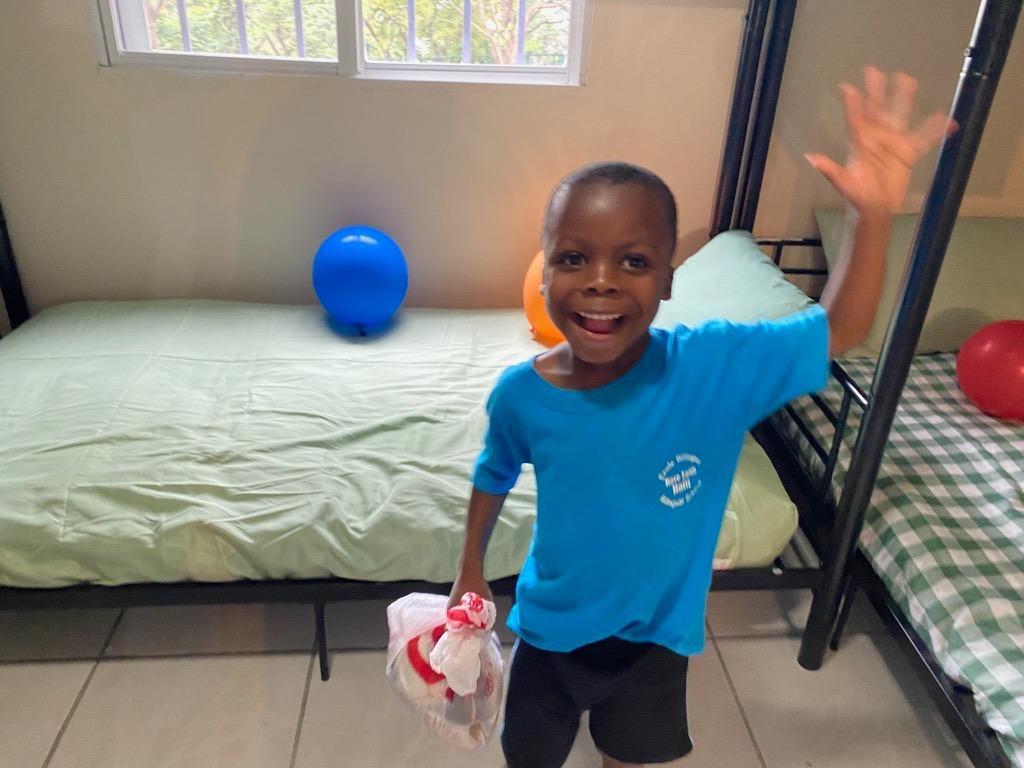 PORT-AU-PRINCE — The kids were toweling off. The food had been eaten. The bounce houses were being deflated. And the skies were threatening rain.

“I think they know something’s up,” Yonel, our Haitian director, said.

“You know our kids.” He smiled. “They’re just smart. They’ve been watching us. They’ve seen us going into those buildings. They’re expecting something.”

I thought for a moment.

“We’ve come this far,” I whispered, conspiratorially. “We’re not blowing the surprise now.”

It had been a miraculous day, the day we took our 53 children from their old orphanage to see their new orphanage. Only they didn’t know it was their new orphanage. That was the surprise. We had a “reveal” planned for the end of the festivities, every step carefully planned, even a volunteer cameraman to film it all.

I was determined to make it every bit the astonishment we had crafted.

We’d started the adventure mid-morning, getting all the kids dressed in bathing suits and packing every last soccer ball and inflatable toy we could find.

We hired two large buses, plus several police cars, to guide us through the streets. The spirit on the buses was infectious. It had been nearly a year since our children had been outside our third-of-an-acre facility. That was the day we’d taken our annual beach trip.

And that night the Haitian president, Jovenel MoÏse, was assassinated.

Since then, the streets had devolved into combat zones. Transportation anywhere was a dicey proposition. The delays caused by the chaos, protests, kidnappings and supply chain interruption had pushed our proposed move-in date from January to February to March to beyond.

We had to accept that certain things would not be ready in time for move-in. But the decaying security around our old place made the move to the new place a necessity.

So we drove the kids 20 minutes up the winding hills of Port-au-Prince, down a narrow street (I thought for sure the bus would get stuck) and finally through the gates of the new property.

I studied their eyes as we entered. Suddenly, there were trees, endless trees, and a big hill (our current place is totally flat) and paths and a short road and a couple of three story buildings and yes, a swimming pool.

That brought out the squeals.

So did the sight of so many of our old friends, former directors, volunteers, teachers. Nancy Giles from CBS Sunday Morning came down. So did Jim and Jane McElya, who donated the funds for our school. Verena and Jean Marc DeMatteis, the couple who sold us the new property, arranged for the bounce houses, the shaved ice machine, the popcorn, and the pizza.

The kids chowed, swam, chowed some more, bounced a million times. It was loud and hectic. But there’s something to be said for the cacophony of 50 happy children. Make a joyful noise, the Psalm says.

Finally, it was time for the revelation. The “building” Yonel referred to was to be the kids’ new dormitory, and our amazing staff had been at work for days assembling bunk beds, lining up mattresses, putting on sheets and pillowcases, and marking each new bed with a child’s name.

The plan was to take the kids into the building on the premise that we were just going to “look around.” And then they would see their beds and their names and the balloons and, well, we’d break the news.

But now the kids were suspicious. They looked around, whispering, as if trying to guess the surprise.

“OK EVERYBODY, WE GOTTA GO. IT’S GOING TO RAIN. WE NEED TO GET ON THE BUSES RIGHT NOW! LET’S GO!”

The drew confused looks. We’re going? There’s nothing else?

The young kids began running to the buses. The older ones dragged, fighting their disappointment.

I pull Yonel in close. “Just before they board, come up to me and whisper something as if you’re mad.”

And that’s what happened.

An instant before the kids got into the buses, their heads down, Yonel said, “Mr. Mitch! Wait!” He mumbled something in my ear. I slapped the side of my head.

“You’re kidding,” I said loudly. I turned to the kids. “We have to go back. Someone made a mess in that building there and we have to clean it up before we go! Hurry, before it starts raining!”

What followed was ten minutes of absolute joy, astonishment, confusion, and high-pitched noises. The girls went in first. We told them to go upstairs, and before we got the word “stairs” out, they were running. They reached the third floor and burst through the doors.

There, inside, were clean tile floors, freshly painted walls, and brand-new bunk beds with balloons attached and name tags on each one. The kids screamed as they found their places.

“Who is this for?” they asked.

A loud cheer echoed off the walls.

Downstairs, the boys were barreling through their own new bedrooms, bouncing on the beds, staring at their names, slack-jawed.

“We’re going to live here!” they were told.

“Tonight?” one of them asked.

It went on like that for a while, shrieking, laughing, running up and down the stairs, the kids showing each other their new digs, while the adults looked on, beaming.

There are moments you plan for, and moments you hope for. Sometimes, once in a great while, you get moments when those two things come together in harmony.

Three years of planning, drawing, worrying, looking for money, praying, hoping, enduring setbacks and wondering if this dream was reasonable, rational or even possible, three years all leading to one cloudy afternoon where you get to tell the children you love: “Life can be better. And life is going to be better.”

And it will be. No matter what we have to endure, change, adjust or fundraise, it will be. One look at those kids faces makes it a certainty.

Are there any three words more comforting than those?