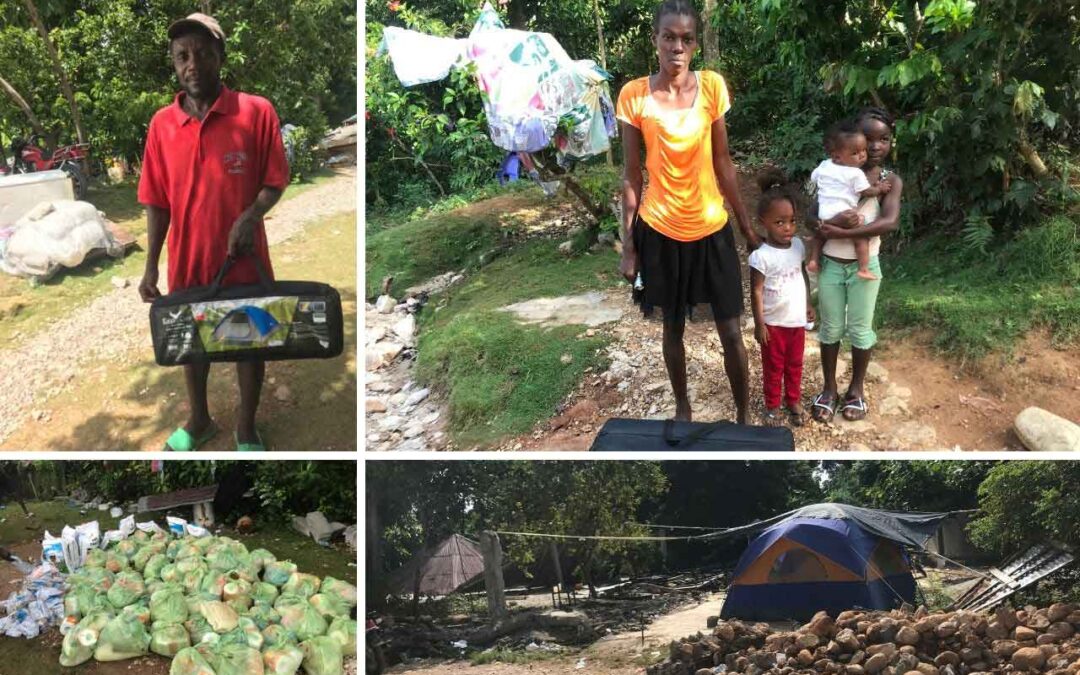 Mitch Albom wrote about Siem leading relief efforts, and the emotion toil of being torn between college in Michigan and his earthquake-ravaged family. You can read this moving story in the Detroit Free Press right now by clicking here.

The supplies we are bringing to families in need of relief in Haiti focus on the elements: tents, flashlights, tarps – literally ways to protect from the rain, sun and darkness.

On this next trip to Jeremie, we were able to take some time to visit with extended family members, some of whom have not been able to keep in touch with kids for years. Here, Esther’s uncle gets emotional watching a video message from her.

On this next trip to Jeremie, #Haiti, we were able to take some time to visit with extended family members, some of whom have not been able to keep in touch with kids for years. Here, Esther’s uncle gets emotional watching a video message from her. pic.twitter.com/UF6TS5PPJb

Mitch Albom writes about repeated trips to Aux Cayes and Jeremie in the latest Bulletin.

Siem is returning to Aux Cayes, while a group of teens — Samanza, Djouna, Appoloste, and Nahoum — accompanied Mitch Albom to relief efforts in Jeremie to distribute food, shelter, solar lights, tarps, tents and more to extended families in the area. Repeated flights will be made to Jeremie and Aux Cayes throughout the weekend.

Siem successfully made it to Aux Cayes despite the treacherous roads, distributing relief packages that include food, tents, lighting, and other essential general supplies. Mitch Albom will be returning next week with more. Your generosity has made this possible.

We have confirmed that three of our children’s families have had lost their homes – and what little they had. But they are just three of the 50,000 whose lives have been further upended. The latest reports put the death toll at 2,200, with 12,200 people injured.

And by some small miracle, the effort to distribute aid has received some actual security support. Haiti’s National Police has deployed extra units to protect aid being shipped into the country, and even a notorious gang leader pledged a temporary truce with other warring factions so that aid trucks can make the journey from Port-au-Prince to the southwestern area hardest hit by the earthquake and storms. Driving conditions are already difficult, and at one point nearly impassable due to mud and rock slides.

Siem is heading to Aux Cayes this weekend, and will be leading efforts to provide supplies, food, shelter (tents) and more to the families of our kids affected by the earthquake and storm. At least five have been left entirely homeless, and we are still waiting to hear the status of many more. Any remaining supplies will be distributed to neighbors.

We welcome donations to support Have Faith Haiti’s education and care of our children, which will continue whatever the natural or political disaster that we face. We expect to take in more children affected by this last earthquake and storm, and will be traveling to the area the first weekend in September to address needs of any family members of our students in Aux Cayes.

If you are looking for addition organizations who help provide immediate aid, we can share the following trusted partners:

Mitch Albom published a new Bulletin post with updates and reactions from our kids. Subscribe and read “How much could you take?” here.

We asked Siem, who came to Michigan to prepare for his return to Madonna University, to share what he’s feeling about the latest earthquake in Haiti.

A 7.2 magnitude earthquake hit Haiti on Saturday, August 14th, about 80 miles away from Port-au-Prince. Kids at Have Faith Haiti Mission felt the shaking, but the campus’ structures are in tact. The children are a bit rattled, especially those who remember the last one. We are worried about those in coastal areas including Jeremie and Aux Cayes. Some of our children come from Jeremie, admitted after the devastating effects of Hurricane Matthew, from which many still have not recovered. Many of our newest are from Cayes.

Within two weeks, we will be heading down to Les Cayes area to check in on the families of the nine children we took in last month who are from there. We are prepared to help any children who have suffered in this latest tragedy, including taking them in if we need to.