And baby makes three, with a village ready to help 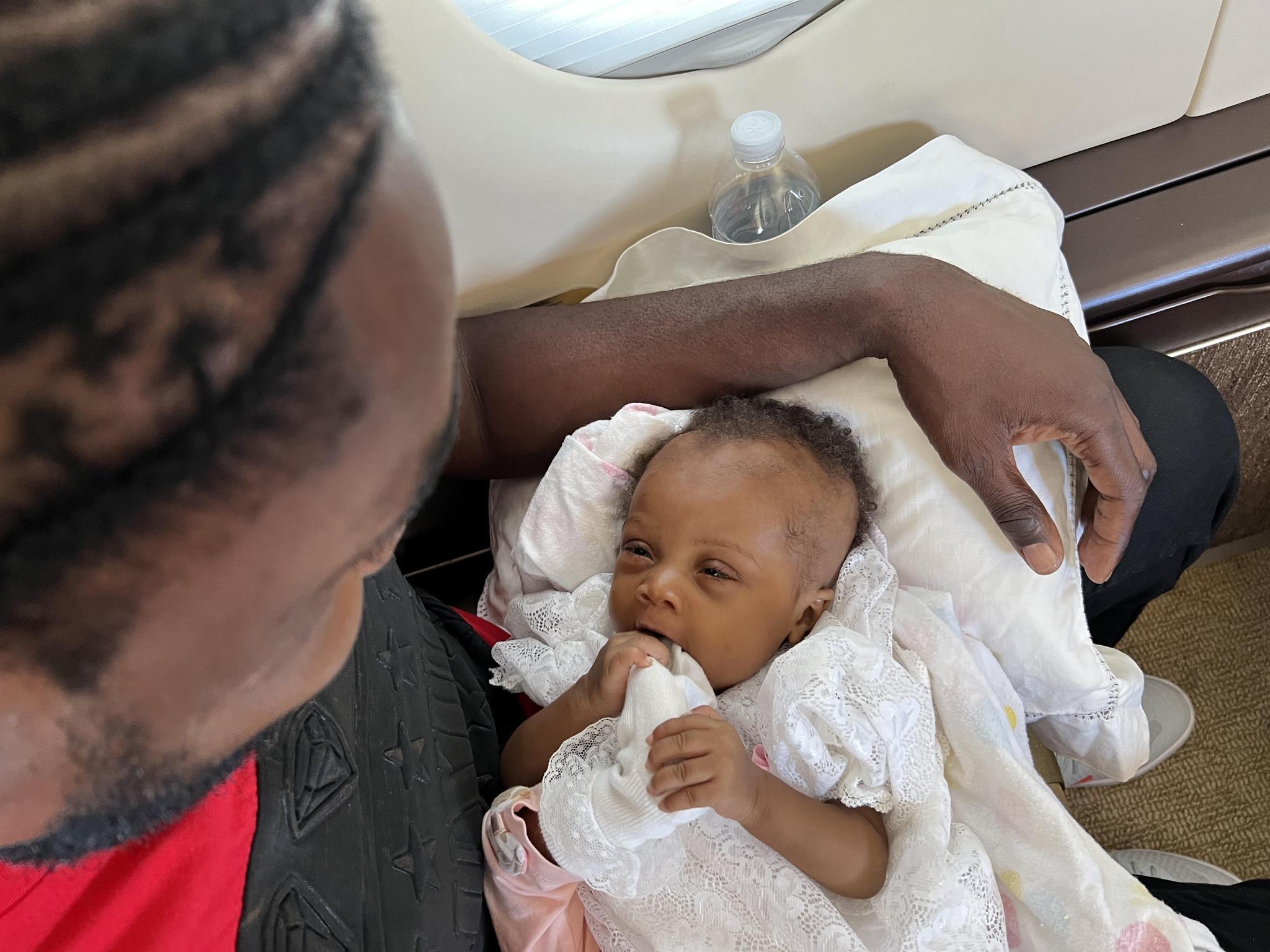 It may take a village to raise a child, but sometimes it takes many villages to save one.

As you know from reading these entries, we are in the midst of moving to a new location. Construction is underway. Plans are afoot. We’re even planning how to break the news to the kids with an elaborate field trip.

And then along comes a baby.

Yes. A baby. The youngest child we have ever had. Her name is Nadie and her backstory is complicated, but suffice it to say, she had been living in a village outside of Mirogoâne and was severely malnourished when she came to us a few weeks ago.

She was six months old and weighed seven pounds. That’s a normal weight for a newborn, but not a child halfway through her first year on earth. Her little legs were bony. Even her neck seemed thin. Her eyes were thick with goo.

We immediately took her to the hospital.

The limited tests there confirmed what we thought. Malnourished. Anemic. Suffering from conjunctivitis.

Now, weird as it sounds, that’s not a sentence I use often these days. After 12 years of running the orphanage, I thought I’d seen most scenarios. Our typical approach is to use existing resources, do what we’ve done before, modify slightly if necessary.

But this was wholly different. Our previous youngest child was a year and a half old. Already walking. Eating. Responding to verbal communication.

Here was a six-month-old who, developmentally, was near newborn status.

“What do we do?” seemed the logical question.

But this is where the multiple village thing comes in. We immediately hired a full-time nanny with experience nursing infants. We had someone come in from America who was able to secure a few bottles of baby formula, the kind designed specifically for kids in Nadie’s situation. We were told that she had been surviving on sugar water. No breast milk. No formula. Just sugar water.

The nanny, Miss Genevieve, promptly began feeding Nadie with a bottle, which Nadie took to like a thirsty man takes to drinking fountain. We called in our Haitian doctor, who brought a pediatrician with her. And I contacted a physician in Michigan named Martin Levinson, who has been kind enough to see our kids when they come to the States. He responded immediately.

Within 24 hours, little Nadie had five different people nursing, examining or analyzing her. Not to mention the 50 plus kids outside the room who were begging to see her. There are many beautiful moments at an orphanage, but few are more tender than seeing sweaty kids stop their games to fuss over infant and ask if they can hold her.

Nadie the Newcomer was already capturing our hearts.

Meanwhile, her own body was in great need. When we submitted the blood work to Dr. Levinson, he shared it with colleagues and suggested, if possible, we should get her to the U.S. Things were dicey. More tests were required. What about her cognitive development? Her neurological development? How much had the malnourishment stolen away?

So the villages kept expanding. With help from incredible people at the U.S. embassy, we were able to get paperwork needed for an emergency medical trip. And less than two weeks after coming to us, Nadie was en route to Michigan.

Once here, Dr. Levinson’s team got her examined and prescribed ointment for her eye issues, iron drops for her anemia, and a feeding schedule to bring up her nutrition. Another village was recruited – the folks at Children’s Hospital in Detroit, where Dr. Justin Klein, who has operated on one our kids in the past, was able to arrange a team of nurses who could successfully draw blood from little Nadie, whose veins were barely accessible due to her size and malnourishment.

Meanwhile, as Janine (my wife) made a home for her, Nadie’s support team was blossoming in our house, from the Haitian kids who had come to start college later this month, to relatives, to friends, to an incredible family named the Chambers, whose daughter, Halie, runs our volunteer program at the orphanage and whose mother, Ann Marie, and sister, Bria, have been doting on Nadie days, nights and weekends.

You take all these villages, the one she came from, the one at our orphanage, the medical community in Port Au Prince, the folks at the embassy, the doctors here in the U.S., our family, our college kids and the expanding group of volunteers in our home, and collectively, what happens? Nadie gets fed. Nadie gets loved. Nadie gets changed, cleaned, bounced, held, stimulated with tiny mobiles and toys.

And, with God’s help, Nadie gets healthy.

That’s the plan, anyhow. Her weight has increased to over well over nine pounds. Her head has actually grown dramatically in two weeks from the nutrition. Her eyes have cleared up. And her exhausted, vacant look has been replaced by an infectious smile that is as wide as the line of people willing to help her.

When she is out of danger, she will return to Haiti. And as she grows, she will never know how many villages came together to lift her up and put her on her way. She doesn’t have to know. It’s enough that it happens. Watching Nadie grow will be its own reward.